Growing Your Business Through Collaborations with Michael Worthington

Today’s guest is Michael Worthington. Michael is one of the founding partners at Worthington and Stoop Private Business Consulting.

Worthington and Stoop provide training to millions of people world-wide with their online TV Show ‘Business Today‘ and their online radio station ‘101 Business Radio‘. Through the development of the 101 Media Group; a global media production and distribution company, Worthington and Stoop are able to share their knowledge in the area of business development in over 64 countries around the planet.

What is the emotional pull of your market. Think of this as emotional niching. Your marketing needs to speak to their emotions.

Look at the emotion that your customers are trying to fill and be the one to fulfill that emotion with your products and services.

Prepare For It To Be Different

When we very first start off, we tend to go to networking groups and we tend to do a lot of referral business and that’s pretty good. We refer people to people we know, like and trust and they refer people to us. It becomes trying to be known as the person who knows everybody and then you’ll always get asked. Business tends to grow that way and that’s kind of an informal process but collaboration and joint ventures, as we grow, become projects. It means that you’re actually going to move into a space with another trusted entity, another business person and then align yourself and strategise an actual formal project, formal agreement. You’re going to design this product or service offering that you’re both going to contribute to the marketing, you’re both going to contribute your time to, then you’re both going to share in the profits.

Learn To Crawl Before You Try And Walk

Having to contribute some of your money into structured marketing problems is perhaps the last thing on your mind. You’re probably going to have to keep your referrals and keep your collaboration techniques, build that skill set up. So when you get to the $300-350,000 turnover mark, you really start to have a little bit of capital then to do a real joint venture that will have massive dividends and massive returns. So that’s one of a few criteria that you should think about when considering joint ventures and it’s, “Let’s crawl before we walk and walk before we run.” That might give you a bit of a snapshot of the difference between a referral marketing strategy, which is absolutely brilliant, and they never go awry no matter what level of business you’re at, and a formalised joint venture which is a full-on collaboration as a project.

An example is a gentlemen Michael spoke to in the UK. He started building his Rolodex of services up. In the end, he found a point of entry into gardeners who were building stone walls, Because from building the stone wall in the front garden, they needed a deck done, they needed artificial lawn put down, they needed some landscaping put down, they needed the little lights put into the deck so it made it all look pretty, maybe some fencing and some gates. He built this Rolodex of services from having a chat, and Michael said, “Where’s the entry point? Where’s the soft point?” And he said, “Well it’s the wall, that’s really where it all begins. That’s got to go in first. Everything gets structured around that.” We got him to go to two or three people who did that particular service and say to them, “Hey, how would you like me to be your lead generator? I’ll go generate the leads, you show me how to quote this thing.” Because it’s eventually per linear medium by the height, so you get your square meterage.

They responded with, “Why not? You bring us leads, it brings us leads.” So what he did was, he built himself an actual landscape business, and he wasn’t even a landscaper. He just had this Rolodex of services he’d built up and he actually went out, quoted the wall and while he was there he was saying, “Who’s doing your deck? Who’s doing your lawn? Who’s doing the paving? Who’s doing the decking lights? Who’s… ” Because of that he runs a fantastic business. It’s entirely possible he hasn’t picked up a spirit level or a string-line in his life and it’s also entirely possible he won’t ever have to either. That’s great collaboration, bringing people together. He became just one of those genuine people who could talk to people, and people got to know, like, and trust. For there it quickly became, “You know what? You’re actually looking after me.”

You Don't Necessarily Have To Be Unique

People tend to get a bit precious. Just because somebodies doing a podcast like this and maybe you do podcasts, yourselves, a lot of us do podcasting, don’t be afraid to come and contribute to somebody else’s show and reciprocate. If you collaborate with people, they’re talking to different people then you, you’ve both got different attitudes, people like some people better than others. When you collaborate, you start to learn other people’s systems that might benefit you and show them yours. Say, “This is what I’m doing this, this is how I’m doing it.” There is so much work out there, there’s no fear of competition anymore that you can tap into. You can go with an attitude of scarcity and that will contract you, and hold you. If you go with an attitude of abundance, sharing, and collaborating, that will expand you and it never ever fails to do so.

The Strategic Manager by Mike Davidson

Listen to Small Business Talk Episode 71 for the full episode on how to Grow Your Business Through Collaborations. 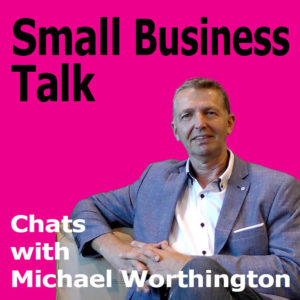