After moving to the US two decades ago with limited English, Victoria overcame her crippling fear of public speaking to build several businesses, teach in a variety of industries, and speak in front of small and large audiences. She appeared on Fox News and have been featured in numerous publications, including CBS Houston and BizWest Media.

Taking her own experiences going from scared to sought-after speaker, Victoria created the Brilliant Speakers Academy , an online public speaking coaching program for introverts. She also owns Nutty Scientists of Houston, a passion project about inspiring kids to fall in love with science.
Victoria holds a Master of Science in Computer Science and is currently completing a Master of Arts Degree in Communications and Media Technologies. She lives in Houston with her husband and two sons.

The biggest mindset shift that I think anybody who struggles with public speaking fears needs to make is soon as you’re in front of your audience, instead of asking yourself, “What does my audience think of me? You make it, “How can I make my audience feel?” Because it’s all about what we can do for our audience. The best public speakers are givers, they’re not receivers. They’re not standing on the stage going “Me, me, me, me, me.” Right?

The root of fear is in the fact that we’re constantly worried about what will our audience think of us. As soon as somebody goes on stage, goes on a live stream, on video, wherever, as soon as you’re in front of an audience, we all have that same problem. We all think, “Oh, what if I’m not enough? What if I’m not smart enough? What if I’m not knowledgeable enough? What if they find out that I don’t know anything?” We all know it. Everybody suffers through it. And it’s completely illogical, it makes no sense, because we are enough. We’re experts, but it doesn’t feel like that when we’re in front of an audience when fear really grips us. What really helps, and just going back to thinking about your audience, our brain is not truly capable of thinking about several major things at the same time. Our brain can only focus on one big thing. If that one big thing is, “Oh, I’m so scared,” because “Oh, they’re judging me. Oh, they now know I’m a fraud,” then that’s all you can focus on. You’re going to still mechanically speak, but it’s not going to be the same experience for your audience. Versus when you are focusing on your audience from the very beginning, when instead of thinking, “What do they think of me?” You turn the tables and you think “How can I make them feel?”

A lot of people have Impostor Syndrome, and like you say, it’s very interesting when you hear some of the big names and people you look up to say that they still have Imposter Syndrome. We’ve done two different episodes in Small Business Talk on Imposter Syndrome. Episode #012 Episode #023 Something that’s out there, we need to be looking at, serving and helping our audience, rather than worrying about what we’re actually doing.

Try To Be Genuine

Right now, audiences everywhere are exposed to so much public speaking every single day. You know, you’re driving to work, you’re driving to your office, you’re listening to a podcast. It’s public speaking. You come turn on your computer, you go to Facebook, “Oh, what did he do?” Public speaking. Then, you may go attend a live event, somebody’s on stage, somebody could be on live TV, somebody could be doing a live stream. We are surrounded by public speaking and as audience, we’re becoming really, really savvy about recognizing when somebody is fake, when somebody is not quite focused on us as their audience, and they’re full of themselves.

When they’re not authentic, when they’re trying to portray themselves as somebody else or they don’t actually have the knowledge that they’re trying to speak, the audiences are very savvy, and they can get their BS monitors up quite quickly and they can tell that you don’t know what your talking about.  The other point, too, is that we’re personally our own harshest critics. So quite often, people will say, “Oh, you’ve done such a great job. I really like what you’re doing.” And you go, “Oh, but I did this, I made that mistake. I didn’t say that word.”

Being genuine, being authentic, it’s very, very important. That’s number one, you start thinking about your audience, you focus on your audience, then you let go of any notions that you have of how a perfect public speaker is supposed to show up, because there is no perfect. If you try to show up as somebody else, they hear it. There is only for so long you can stay in character for. We’re not that great of actors. We can be in character for weeks and weeks and months and whatever. It’s much easier to come in as yourself and stay as yourself, because then you’re not focused again the whole time.

If you’re thinking “I’m not a fraud,” but you’re thinking, “Okay, I’m going to sound exactly as that big influencer that everybody knows, and everybody loves. I’m going to use her words. I’m going to use her intonation. I’m just going to be like her, and then they’ll love me.” No, when you are focusing on that, again, you’re not versatile, you’re not serving your audience, because they need you. You are enough. We say it so often, “You’re enough, you’re enough,” and people kind of stop hearing it, but you really need to hear it. You’re enough means that what you know is enough, the way you have your experiences stacked up is enough. The way your life story has gone so far is enough, because the way you can explain, present and impact your audience, only you can do that.

Listen to Small Business Talk Episode 57 for these tips and more on how to overcome your fear of public speaking with Victoria Lioznyansky. 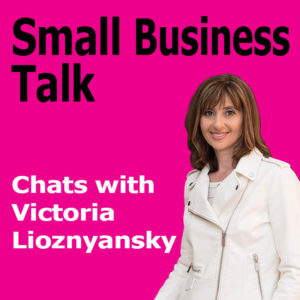